Discussing Indonesian cuisine is endless. There are so many variations of cuisines from all over the archipelago that are deliciously appetizing and second to none. Each region from Sabang to Merauke has a different type and taste of cuisine. One of the favorite types of dishes that are most often found in many regions is soto ayam. Basically, soto is in the form of a yellow soup dish containing shredded chicken, soun, cabbage, bean sprouts, tomato slices, boiled eggs and so on, which is very delicious when served with white rice, with the addition of chili sauce and soy sauce as well as a sprinkle of celery and fried onions. The menu of soto ayam also varies in each region, so we know many types of chicken soto, including Soto Kudus, Soto Lamongan, Soto Madura, and so on. Each region has its own way of cooking soto. Spices, ingredients and cooking modes are also varied. This article will discuss some chicken soto recipes. Interested in trying it yourself at home? Check out the ingredients and how to cook it.

Although soto has mushroomed to be sold by merchants, from carts or roadside tents, food stalls, to restaurants, there is nothing wrong if you make your own soto at home. Just use some simple cooking ingredients and seasonings that are easy to get, you can already make delicious soto for the family.

The key to the deliciousness of soto is in the soup. To get a delicious soup, there are a few things that we need to pay attention to. For example, the freshness of chickens. Make sure the chicken we choose is still fresh, avoid using chicken that has been stored in the freezer for months until the colour of the meat changes.

Next is the spice or spice that we use. Especially for the clear chicken soto recipe, the spices we use are not too much. Some of them are onion, garlic, pecan, turmeric, and ginger as fine spices, and are complemented by a few strands of orange leaves, bay leaves, and lemongrass stems.

The following are the steps to cook chicken soup along with tips for cooking it correctly.

Prepare in advance all the ingredients, including chicken meat, and the spices are onion, garlic, turmeric, ginger, lemongrass, bay leaf and so on. To make soto, choose old chicken meat, which is usually denser in meat texture, because it will produce a more savory broth and is suitable to be a complement to shredded chicken soto.

Prepare the chicken that has been thoroughly washed and cut into several pieces, then boil it in a saucepan. Put the chicken in while the water is still cold so that the chicken pores are open and the whole chicken juice comes out to the maximum. If there is foam collecting on the surface of the water, remove it immediately because this is dirt and fat.

While boiling the chicken, puree the soto seasonings ranging from onion, garlic, turmeric, pecan, ginger and pepper. In addition to fine spices, also prepare complementary seasonings, such as lemongrass, galangal, bay leaf, orange leaf. All these spices are sautéed until fragrant and cooked and then remove from heat and set aside.

Put the sautéed fine spices in the boiling chicken boiled water, then cook over medium heat for 1 hour. Remove the chicken, then fry for a while, and set aside. If the chicken has cooled, then the chicken is shredded. Meanwhile, keep cooking the chicken broth soup that has been mixed with stir-frying spices. Shortly before the soup is finish cooking, add salt, sugar, flavoring, as well as sliced tomatoes and leeks.

Prepare complementary ingredients of soto, such as soun, boiled eggs, bean sprouts, and finely chopped cabbage. Combine these filling ingredients into a bowl, don’t forget to complete them with the shredded chicken meat just now.

Water with the soup soto that is still hot, then serve it. Soto can also be equipped with chili sauce, sweet soy sauce and a little lime juice to make the taste fresher. Don’t forget to sprinkle with finely sliced celery as well as sliced garlic and fried shallots. You can also add other complements according to taste, for example thinly sliced and fried potatoes, chips, crackers, and so on.

Eating soto is not complete if you don’t add chili sauce. The spiciness of the chili sauce makes the appetite increase. The following is a recipe for sambal soto.

There are many versions of the chicken soup recipe, some are clear soup, and some are rice. Clear soup chicken soup is most often found and is usually a favorite of many people because of the fresh and savory taste of the soup. Here are five kinds of chicken soto recipes that you can try yourself at home.

Those are some recipes and tips in cooking chicken soup. Are you interested in trying yourself at home? Happy cooking! 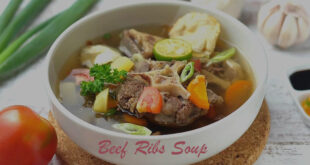